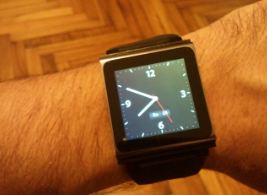 For some reason Apple didnt like the idea of people wearing the tinniest iPod as a watch because the new seventh-generation of iPod Nano announced on Sept. 12 2012, is larger, impossible to use as one…
END_OF_DOCUMENT_TOKEN_TO_BE_REPLACED