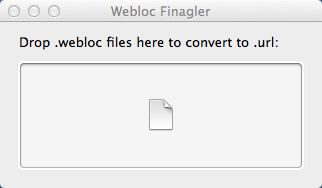 Its been several months since I moved from the Windows world to the MAC world (at least at home). But until today, one of the things that annoyed me a lot was the fact that everytime I dragged and dropped a website URL to my desktop to access it later, a .WEBLOC files was created. These files are compatible with Safari Mac Browser, but Windows doesnt know what to do with them. I needed a solution to be able to open the shortcuts of pages I create with both Windows and Mac computers.

So after searching online I found this post on Apple Forums, where a good samaritan called MarkDouma created a free little application called Webloc Finagler for OSX to just drag and drop the Webloc files and the app will convert them to  .URL files. The created files will be pointing to the same website and fully compatible with both OSX and Windows :).

You can download the little App for free from this direct link.

One more time, Apple decided to go out from a widely used standard and create their own. If Apple really wants more people on board, they have to makes easier for Windows users to feel tempted on migrating. I am in favor of creating new standards if they actually are better, but you cant ignore what already exists, it must be backwards compatible too.