A new version of the OS for Apple mobile devices has been announced, developers have access to a Beta version since Monday at the conference and for the rest of us (mortals) we will have to wait for September / October  for a final release. There are a lot of improvements which I personally like and finally…Apple is adding functionalities to our devices that we could see since several years on Android so the company is somehow, catching up and adding their own spices. The main change is a New Colorful Design: The company argues everything is more simple, but a lot of reviewers found the contrary. Flat icons instead of 3D previous look, personally I think it looks way more functional and nice to the eye. Almost all applications have received a bump up on the way they look and the way they work. You can watch beautiful images and a full list of new or improved features on the following link from Apple (if you promise you come back and continue reading my post) 🙂

Overall I like the new ideas that come to iOS 7 but we still have to consider there is a long way to go as it is the first Beta. Lets see how the end product get to our hands next fall. 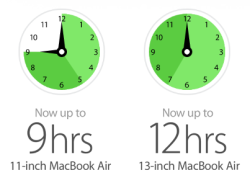 As expected new 11″ and 13″ models of the super light Apple laptop received an update on the processor side (now it comes with the latest 4th generation Intel Haswell) and this update also helped to really increase battery life offering: 9 hours on the 11″ model and 12 hours in the 13″ model for a real all day computing experience. The new line also includes 802.11ac Wifi which claims to be 3 times faster than N, a 45% faster flash storage drive and an Intel HD5000 video card which gives more power to the graphics.
The new pricing is interesting because they lowered the prices to from USD 999 for the 11″ version with 128 GB of flash storage and 4 GB RAM to USD 1299 for the 13″ version with 256 of flash storage and 4 GB of RAM. If you are looking for a light stable laptop, go for it, no doubt. You can check great images and more details on the following Apple link, (but remember, come back ;).

Refresh on the Wifi routers from Apple has also been announced with a non standard physical design and AC speed :). Look how different they look here. 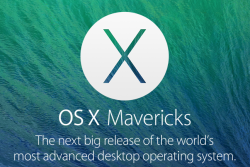 Without having anything to do with Top Gun but to the place in California (the cats are over from now on and for the following 10 years just names of places in California), Mavericks is the new name of the latest Desktop Operating System for Apple computers. The most incredible improvement I think is the processor power optimization, which will help laptops to preserve battery. Optimization for multiple screens finally arrived to the Mac. You can check all new stuff from Mavericks on Apple´s website on the following link. Its also available in Beta now for developers, and it will see its final version around September or October 2013.

Finally Apple announced a new cylindrical model  of their most powerful desktop computer, and we all where left astonished, the phrase of Phil Schiller (senior vice president of worldwide marketing at Apple) live at the conference defines it all “Cant innovate anymore my Ass“. Check the incredible design and specs of this “monster” here.

Overall, I found the presentation better than other´s, they still got the surprise element on this one and that is what the users and fans want. Nobody predicted the cylindrical Mac Pro and that is pure innovation. I´ve been reading some early iOS7 opinions on the web and some people hate it and some others love it. I really don’t know if its for better or worst, but it shouldn’t be so terrible, simplicity is still there for what I could see. But maybe if they would allow the users to choose how their icons should look…

I was personally waiting for the MacBook Pro refresh too but it seems this will be presented in September/October together with (I personally think):  New iPhone + Cheaper iPhone, iMac Processor refresh and maybe retina?, New Apple TV? and iPad 5 + Retina iPad Mini?

Or maybe if they really have all these products to present Apple could add a third presentation of products to their classic 2 per year. I think this could help to lower anxiety for users, stakeholders and fans around new products and upgrades.

If you missed the presentation (which for the first time Apple broadcasted live!) You can watch it full online  Here.

What do you think on the Apple event? What were you expecting? Please share your thoughts below.