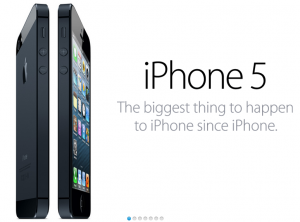 At first I was having kind of a sensation of disappointment on Apple, and then, talking with a friend, he said something very certain “In the end it´s just a phone”…
Why are we expecting so much from a phone? Might be because Apple itself set a new smartphone starting point with the launch of the first iPhone, and over the years it got better and better?
Or is it just that we are so hungry to have a revolutionary device in our pockets? How often this can happen? Maybe we will have to wait for the next year´s iPhone to see if some really revolutionary thing is implemented, a.k.a. astonishing battery performance J

The 2012 update has been rumored over and over again since months and a lot of picture parts and designs have been leaked on different forums. In the end, when you put most of the pics together they were all in all, almost certain.

It would have been nice to see as the icing of the cake: NFC, fingerprint reader among other things, but although the new updates don’t look as great as maybe a previous version, we are seeing a great peace of technology all put together in a very comfortable format with respect for quality, as only Apple knows how to do.

It will be interesting to see what will happen with the smartphones market now, as a lot of people where just waiting to see what the iPhone 5 was all about before taking the decision on buying or renewing devices (me included). For example my girlfriend finds the iPhone 4S just great for what she needs and here in Switzerland Sunrise is offering it without any cost for a 24 month contract of around USD 45 a month. (We will probably get one this week) 🙂

Samsung has been doing a really nice job with their S3, but also iPhone users generally stick with Apple devices.
Of course you can check more details and the official video from Apple presenting the new iPhone 5 on the following link.

What do you think? Will the fresh iPhone 5 succeed? Or we are facing the beginning of the downfall of Apple?