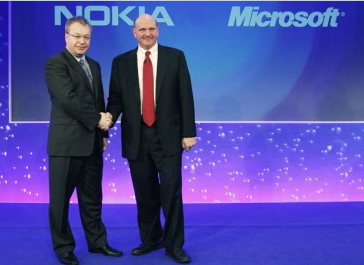 Microsoft just announced that they will be buying Nokia´s devices and services business for around USD 5 billion. They are also long term licensing their maps and some patents for another USD 2.2 billion.
Nokia will remain their business with Navteq a major player in Map data for GPS receivers and applications.

Stephen Elop, CEO of Nokia seems to be now a good candidate to take over as the new CEO of Microsoft. He already worked in the past  at Microsoft from January 2008 to September 2010 as the head of Business Division, in charge of Ms. Office and Ms. Dynamics and was also member of the company´s leadership team.
The idea of Elop becoming the CEO of the company doesn’t sound too bad, but at first Microsoft decided to name him “Head of Microsoft Devices team”.

I´ve he
ard good feedback from people using a Windows Phone, but the market share is still very low and its getting very difficult for Microsoft to get developers on board for a platform that has a very low usage on the market, they prefer developing for Android and iOS devices.

The purchasing of Nokia by Microsoft is a interesting move, lets see if they succeed making something good of this deal. The Seattle company has fame of complicating things when acquiring companies, but with a new CEO coming at any time, we will have to see.
What do you think? Was this a smart move by Microsoft?