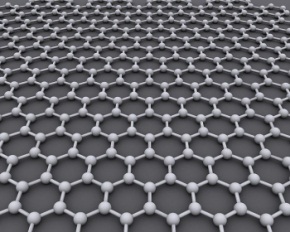 Super Fast: Graphene is an excellent thermal and electric conductor, better than copper and up 1000 times more conductive than silicon.
Super Strong: Its harder than diamond, around 100 times stronger than steel and can stretch up to 20% of its original length.
High Visibility: Its unique electrical properties mean it absorbs a high percentage (2.3%) of light, which means that despite being only one-atom thick, it is still visible to the naked eye.
Impermeable: Graphene is the most impermeable material ever discovered.

“We have been trying to go beyond graphene by combining it with other one atom thick materials. What we have been doing is putting different layers of these materials one on top of the other and what you get is a new type of material with a unique set of properties. It is like a book – one page contains some information but together the book is so much more. We have demonstrated that we can produce a very efficient photovoltaic device. The fact it is flexible will hopefully make it easier to use. We are working on paints using this material as our next work but that is further down the line. Konstantin Novoselov

– Super capacitors and fast charging: Because of its properties it would allow to plug your phone and charge it in just some seconds. Imagine this application for transforming standard batteries into super capacitors for example in cars, you could be driving nonstop with “hot zones” where the car would automatically be re-charged on the road without even stopping  yes, like a video game. 🙂 I think this is one of the most important implementations of the new material. Nowadays we have so many devices that need to be charged that this will not only help to save time charging them, but also to the earth as less use of batteries with result in less contamination. Also as graphene is carbon based it could be eventually discarded with the kitchen compost 🙂

– Super Filter: Because of its properties of impermeability it could be a filter for sea water. Developing it correctly with tiny holes just big enough to let the water through and leaving the salt out,  this will result in safe consumable water. Imaging if we solve the problem of lack of water in the world thanks to graphene?

– Electronics: Imagine a phone or any type of gadget with graphene, this material is so strong that you would never worry again about scratching the phone or shatter the glass surface of your iPhone.

When do you think Apple will produce the first graphene powered iPhone? Maybe we can see the “iPhone G” in a couple of months? years?