Viber the application that allows you to talk for free over the internet on your mobile device, just launched today Windows and OSX desktop versions to offer a more complete experience.
The WhatsApp killer (Viber), already used by 200 million users worldwide, also incorporates video conference (in beta) between the new desktop versions.

The year 2013 will show which is the market leader on the segment. Till now Apple had a very complete solution with their iMessage platform which can be used along all their product family (iPhone, iPod, iPad and Mac computers), but if Viber accomplishes to make this even better by offering a free cross platform service, the big fruit company will start to worry.

We tested the fresh Viber for desktop and we found it very simple, and its interface looks a lot like Twitter, one of the most used Apps in the mobile world, so the move was clever, the learning curve for the user will be short.

The video conference functionality between desktops (for time being), works really great. And we love the new way to transfer calls between devices, from a desktop to a mobile and from a mobile to a desktop without having to re-initiate the call.

Also iOS and Android versions have been updated to version 3 offering a very nice updated interface and more things like video messages, languages, and more. Get the latest version from www.viber.com or from your mobile´s App store 😉
It would be nice to see how Viber matches Skype (recently acquired by Microsoft) by adding outbound calls to classic phone lines. A lot of users are already complaining about how Skype turned into a heavy inflexible software. Its Viber´s opportunity to make it right! Lets see! 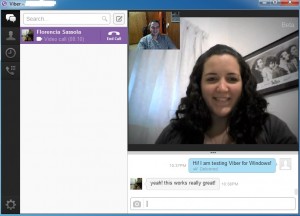 We tested Viber´s new video conference between desktops and it works great!