How LinkedIn tricks you to invite people to their network 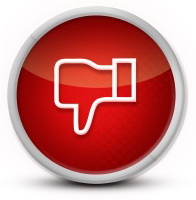 I use LinkedIn since several years, it allows you to connect your professional profile to a lot of people in millions of companies around the world. Depending on what you do, being and get connected in LinkedIn with all the people you’ve worked with and know professionally can open you doors in the present and in the future.

One thing LinkedIn does is to suggest you “People you may know” to add them to your own network, and its this spec which I am not so happy with.

Some weeks ago I checked my profile and added some contacts that I know, I was surprised they were on LinkedIn so I add them as suggested by the site. My surprise was when I received an email from them saying they don’t use LinkedIn at all, then I realized, LinkedIn was sending invitations to these contacts so they register in LinkedIn!!!

So I wrote to the support team at LinkedIn and also posted on their blog here, and they told me they were going to check it with their development team, a month later, the problem persists.

I don’t like when companies try to deceive you like this, I don’t find it fair, and I find it even less fair when I pay month to month to be a Premium user of the platform.

Just as a validation, if I try to look for “Gerardo Viotti” (a well known friend of mine) using the LinkedIn general search, this is the result 🙂
As you can see he doesn’t have a LinkedIn profile, of course I confirmed over WhatsApp with him too 🙂 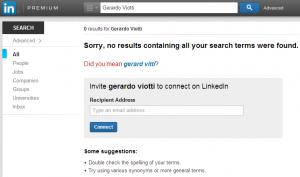 And as you can see, when displaying the suggestions through “People you may know” LinkedIn mixes all suggestions in the same page, without any differentiation telling you if they are users of the network or not. So if you add one of these contacts that actually are not registered on the platform, you would be sending them an invitation WITHOUT YOU KNOWING IT!

Check the red squares I marked on this print screen to show the suggested contacts that actually don’t have a LinkedIn account: 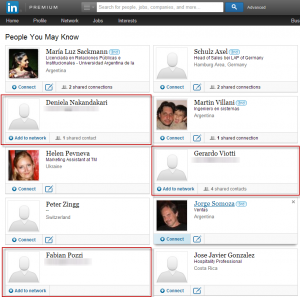 I hope LinkedIn changes this ASAP because I find it really bad. What do you think?